odyssey is a one-page game for 3-5 players where everyone plays one main character—a wayfaring soul on a long and challenging journey home. it uses a twelve-sided die and a six-sided die.

This game is simple and powerful. From character creation, you get a character who can be shaped by all the players at the table equally - someone defined by their want, and by their journey. The story can go anywhere, for any reason.
Play is simple, and open ended. This doesn't always work for me - I usually prefer leading questions - but in this case, the challenges open themselves up well to storytelling. Particularly useful is the chance for multiple people to tackle the same problem in the case of a failure. It means that your character will take new approaches all the time, with each change of tack more likely to work. It lends itself to creating a strong character naturally.
I've played this game twice, once with a new character, once with an existing character. Both times, the story was deeply meaningful, and the world was better for having played that game. I'd recommend this with any group of people, for any length of journey. It is ultimately versatile.

oh my gosh, thank you so much!! odyssey was one of the first games i ever wrote and i still think it’s pretty good, and i’m so glad you’ve had a good time with it!!! 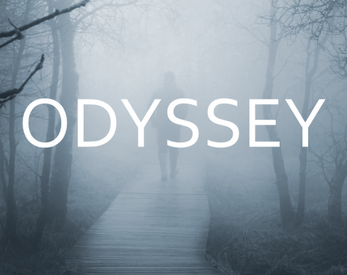