link is a two-player rpg inspired by pacific rim, about piloting a mech with a co-pilot who shares your emotions and memories.

it was written for the emotional mecha jam. of course.

In order to download this game you must purchase it at or above the minimum price of $5 USD. You will get access to the following files:

if you can't afford to pay for this game, feel free to take a community copy.

it's me again, hope this isn't weird? just wanted to say that we finished our game last night, and we both loved this game a lot. we got the same uncovered memories a few times, but it never became boring, because it challenged us to really revisit certain moments from different perspectives, to build on the memories we shared, and to think about how our co-pilots' relationship shifted and grew in the act of remembering. anyway, we had decided to end the game when we got to the last card in the deck no matter what, and the way things were going, we thought it was going to end in more tragedy. (the enemy had......13 or 14 times they got a hit on us or had a tactical advantage over us. we had to keep coming up with increasingly inventive ways to have our co-pilots not die, and fucked up mind games seemed to do the trick.) we had had 1 (one) time where we had gotten a hit on the enemy, and 2 (two) times where we had a tactical advantage over them. and we were at the final stage of this big climactic battle, and we drew our last cards, and we got a hit on the enemy! the second time this had ever happened to us after weeks of expecting the worst, we were both so relieved, it was fucking incredible. love and tenderness saved the day! thank you for making such a fun and inventive game, and for really exemplifying the power of love and tenderness and friendship that pacrim is made of. :')

omg hi, it isn't weird at all!!! i'm so so so glad that u had such a good time playing, that sounds like a wild story!!! and sorry for completely forgetting to respond to ur last comment, i think i literally read it, went to look at the bit u were talking about, was like "oh yeah, that's super confusing i should fix it" and then ended up making a whole new layout for the game too, lmao. thank u so much for sharing!!!!

omg no problem, thanks so much! it truly was a wild ride, and awesome i'll have to check out the new layout! thanks again :)

this is really good, intuitive, streamlined, and character-driven. my friend and i accidentally created a heartbreaking pacrim space tragedy thanks to this game, and i am very emotional. thanks for making this!

ahhh no prob!! :') we're gonna play part 2 of this space tragedy tomorrow and i am Very Afraid and also excited. quick question if it's ok to ask? (obvs no need to respond, etc): for the choices at the bottom of the sheet that read out "if your two cards are the same number," "if your two cards are the same color," etc, are those in relation to the other options ("if your cards are different suits and differnet numbers," etc) or are they their own separate choices? hope that makes sense lmao, let me know if you need more clarification. thanks so much! 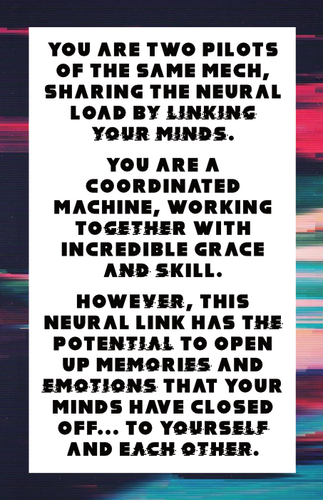 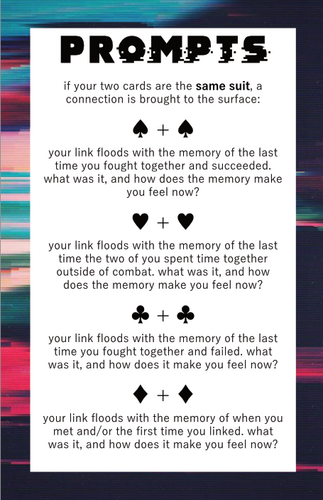