Doikayt is an anthology of short tabletop roleplaying games about Judaism or Jewish themes, written and illustrated by Jews. It was organized by JR Goldberg and Riley Rethal, featuring 10+ Jewish tabletop games by incredible Jewish designers.

In Yiddish, the word doikayt translates to “hereness”. While hereness can be interpreted in many ways, we take it to mean that a Jewish person’s ideology, practices and traditions are a product of their environment, and it is these differences in background and knowledge from sources around the world that make the Jewish people so stalwart.

Doikayt was successfully funded on kickstarter at over 300% of its goal, and now you can preorder it before it goes out to the world  in May/June. Learn more about the campaign and the contributors on the kickstarter page.

You can buy the PDF for $12,  or you can preorder a physical book by purchasing one of the reward tiers below.  A softcover book is $25 + shipping, or a hardcover book is $40 + shipping. US shipping is already included in the price of the rewards, but please keep in mind that international shipping is not. Please add the price specified in the reward description to your purchase if you live outside the US.

There are also many community copies, donated by our generous kickstarter backers, that you can claim if you don't feel like you can afford the cost.

If you'd like to donate additional community copies,  one will be added to the pool for every extra $7 added to your purchase.

In order to download this game you must purchase it at or above the minimum price of $12 USD. You will get access to the following files:

thanks to the generous Doikayt kickstarter backers, we have plenty of community copies to go around! feel free to take one if you can't afford the book right now.

Get a softcover copy of Doikayt, printed by Mixam. You will also receive a PDF. US shipping is included in the base price; international shipping is not. Please add $2 to your payment for Canadian shipping, and $4 for anywhere else.

Get a hardcover copy of Doikayt, printed by Mixam. You will also receive a PDF. US shipping is included in the base price; international shipping is not. Please add $2 to your payment for Canadian shipping, and $4 for anywhere else.

Hi! I organise events for a Jewish youth community, we played some Doikayt games recently and had an amazing time, so we're looking to get a few copies printed for our members! I want to make sure we get the all-clear from you, is there some way we could chat about it in private, maybe by email or twitter DM? (Just followed you there!)

hey! i got this as part of the palestine bundle and for some reason it's not showing that i have purchased it and is asking for me to pay again.... any ideas? thanks!

i love this collection so much! i purchased the softcover book option a while ago and never received it, though - did i forget to add shipping costs or something? just wondering. it appears to be sold out now :/

hey there! there were some delays in shipping stuff but i literally put all of the itch orders in the mail yesterday, so it should get to you very soon!

I recently started working on a RPG "miniseries" length campaign with two fellows who told me "JD, we are both Jewish. We'd love to have Judaism, somehow, be connected to what happens in the campaign, or even a central element." I, raised a Southern Baptist kid, embrace the challenge of doing this effectively and respectfully.  Trying to delve into different expressions of these cultural points of view is one way I'm looking to prepare. I'm very glad I was able to review this material as it will definitely help.

I should note that I haven't had a chance to play any of the games in it, so I'll just touch on the work as a whole. The games here are mostly of the "prompt and play" sort - you roll on tables, or trigger mechanics (whether fictional or not) via things you say and do rather than with elaborate standalone systems.  The wide variety of games in the book is excellent, as is the introductory material. In fact, the first two sections are extremely useful even on their own, beyond the games themselves.  The games are brief but well detailed.  Although one game is a dinnertime LARP, another is a frankly hilarious drinking and songwriting game, and another is a wrestling RPG, the introductory material helps ties the feel of the games together.

It's an odd kind of hobby we have. I certainly would not say my knowledge of Jewish culture, thought or art is significant, but here are fellow creators working in the same space I am, offering those perspectives through a medium that I do have expertise in.  Approached in this way, this work is highly valuable.

I recommend this work even or perhaps especially for tabletop RPG fans like me who are not very familiar with Jewish culture or thought and have never considered bringing it to the tabletop in more than a superficial way.  Best wishes to the team and good luck on whatever comes next.

Thanks for including this in the Palestinian bundle. Really added a lot to the cause. Thank you!

Hi Riley, can you please check the kickstarter messages for Doikayt? I am trying to contact you. Thank you!

So excited to get a softcover of this! The only thing I noticed was that 'emet' seems to be printed from left to right instead of right to left. The text reads 'tem' instead.

Hey, just wanted to let you know there seems to be a slight formatting issue with the Golem game where the hebrew type appears in reverse. Great collection, enjoying so far! 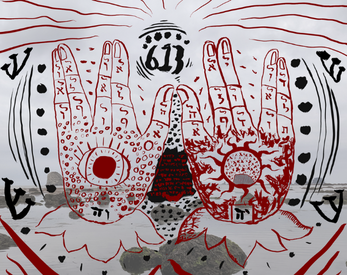